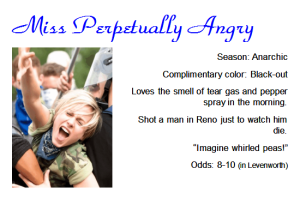 Instigating a violent street protest, Miss Angry at Everything cursed and spit on the Blue Line, returned a volley of smoke canisters, then set a patrol car ablaze.

Mrs. Charming issued a decree for a Royal Ball with a command performance by Lynyrd Skynyrd. All her subjects through-out the kingdom were granted invitations. Even the step-family. (She really didn’t seem to grasp the whole unhappy-wifey bit.) 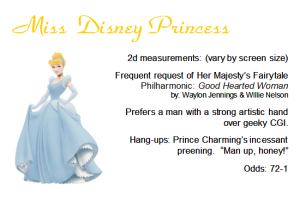 Miss Pussy Hat shimmied up a flagpole to remove the Stars n’Stripes, then set it afire and danced in the flames. Naked.

The Angels didn’t seem terribly upset by anything or anyone enough to protest. And they love their men. (What’s up with that?)

Score: II (that other Mustang)

Miss Jeep Girl and girlfriend (with bullhorn) harassed, broke windows and graffiti’d the RNC’s HQ. Arrested, released and arrested again. Posted to Youtube, and interviewed by fake news. All before noon.

Barbie then went all Jerry Springer on that “fat @#$%&!-ing slob” from Walmart. Live.

The judges wet themselves.

Talent Night
Miss Hooters was disqualified and promptly escorted from the premises for her rendition of Paula Cole’s Where Have All the Cowboys Gone.

Pantsuit Competition
Mary Ann was voted: Most Favorite Gal to be Shipwrecked With. Measurements: (Would be fun to find out).