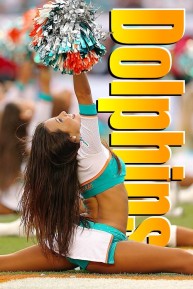 And the game was crude and primitive. Overgrown men smashing an’ crashing into each other, and not just in a halftime rush for the bathroom.

In a world fraught with derision and division, for a few short hours, all men from every walk of life…

…set aside their differences and rallied ‘round a common cause: Us versus them.

The game was perfect in its imperfection: Of men, by men, and for men.

Rules were few and straight forward. There were no television cameras. No celebrities. And no yellow flags.

But there were cheerleaders.

The morning after, the sons of men would gather to recount the weekend’s highlights and mishaps, like stories told of old. And off to the side womenfolk would roll their eyes.

This was America’s game. It was not given for the world to enjoy. And it wasn’t for everyone.

On the seventh day, creation was complete. God rested. Men played football. And it was good.

But the Commissioner said:

“We can make it better.”

And the League brought forth commandments engraved on tablets of Turf:

XI: Thou shalt not molest the quarterback
XII: Thou mayest not jump before the snap lest thee be offsides
XIII: And thou mustn’t ever, no never, celebrate excessively

(Nit-picking rules. Enough to drive a man back to his ex-wife.) Because you hafta have rules otherwise the game might be fun. And to enforce said rules, the Commissioner declared:

And the League brought forth instant replay (followed by tedious booth review, and endless analysis).

In an effort to make the game perfect, the game was made intolerable. And the Commissioner saw that it was good, and further declared:

“Let there be celebrities…”

So, the League brought forth fantasy teams.

And it came to pass, that fans could root for their team, or another team against their team, or multiple teams, or the odd allotment of players from various teams against players from the same team. After all, nothing’s more important than “me”.  (There may be no I in team, but there is in pepperoni.)

“…and the casting of lots.”

For it is written: It doesn’t matter if you win or lose. Just so long as you cover the spread. So, the Commissioner further ordered:

“Let the tribes go out into the world.”

And the League brought forth multi-culturalism, internationalism, and America took its rightful place in the backseat.

After all, globalism worked so well for NASCAR, displacing local dirt-tracking good ol’ boys with foreign car driving heathen. (The South lost again. They just ain’t figured it out yet.) Then the Commissioner conspired:

“Let there be pink pussyhats.”

And the League brought forth linebackers trimmed in pastel hues, boyish cheerleaders, and lady zebras. After all, why should a game of men and by men be just for men?

And looking over the empty coliseums, the Commissioner saw that it was good. But…

“Let there be social justice.”

And the Commissioner said nothing.

The faithful hung their heads in shame, as the people fractured again into partisan divisions:

”Let there be a holiday.”

And the League brought forth the Super Bowl.

Around the world millions upon millions of gentiles and philistines tuned into the Game to End All Games to watch commercials, as the gluttonous consumed deep-fried everything and drank themselves into oblivion.

The morning after, the hungover didn’t know who had won, or played, or where they were.

So, the Commissioner declared:

It is finished. The game is now perfect. But no longer shall it be called football. Behold, the NFL!