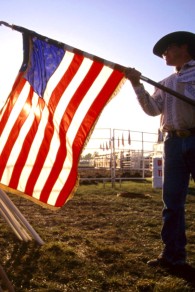 Wisps of caffeinated steam sift into the cold morning air.  Autumn leaves mixed with discarded pumpkins, which had so elegantly decorated the neighborhood, now litter the walks. Sunrise still hours away, the only hint of life are dimly lit windows of the old schoolhouse… a faded Forty-Eight stands guard in the shadows.

Bathrobed welfare squatters will wander through the far side of noon. Followed by the suits and ties on their way to or from somewhere else.

The first Tuesday following the first Monday was never meant to be an entry on a T’do list. Too many died for the inconvenience.

Everyone finds time for the stuff they love. But even with early voting and election day weekends, more happily camp out for the latest gadget than vote. And they shouldn’t.  Shouldn’t vote. They should stay home and play Donkey Kong.

There’s nothing idyllic about democracy. It may be “the worst form of governance except for all the rest”  but why should the haphazard opinions of the uninformed be given equal weight to the careful ruminations of the few and deliberate? Opinions are like belly buttons – everyone’s got one. And more opinions than less won’t enrich the result. Just more pee in the pool.

Too many vote to their own selfishness; for the promisers of free stuff they wouldn’t hire to pull weeds. A Vote Rock’d by the ignorant and fatally indifferent only ensures a government of, by and for idiots. If we get what we deserve, then we most certainly shall suffer.

What we obtain too cheaply, we esteem too lightly.  Thomas Paine

Rather than offering polling outlet drive-thrus and balloting apps, perhaps hopeful voters ought to first pass a civic devotion and competency test, like… doing hand-stands in the rain, or sinking a three-cushion eight with a slide rule. Better yet, name more Presidents than Kardashians.

An insistent pounding on the gym door summons an attendant. A shaft of light falls long evaporating into a handful of leaves dancing on a trailing breeze.The old gent looked perplexed, at first, but smiled at the familiar yet unshaven mug. The door wasn’t locked.

One man. One vote. One cup of coffee.

Jeopardy! Millennial Edition
Answer: The Electoral College most notably has none of these.
Question: What are keg parties and panty raids?