Matt Dillon marshaled law and order on a monochromatic frontier.

And over twenty prime time seasons, many a lost soul seeking their own justice became nothing more than a footnote on boothill in a wisp of gunsmoke.

Defund the Marshal? If that’s the answer, what was the question?

Yeah… be careful what you wish for. In the absence of any organized enforcement, justice will be dispensed by the armed and self-appointed juries of Dodge. Judgments will be severe and measured in lead.

How about we defund public schools instead?

Not that they’ve failed. On the contrary, the Government’s Re-education Centers have succeeded quite well in doing what it set out to do:

America is racist
White Men are evil
Life is cheap, and of course…
God is dead

Graduates are then unleashed on an unsuspecting society with degrees in: Social Unrest, Statue Toppling, and Looting.

“With Malice toward none, with charity for all…”
Abraham Lincoln

Where are all the grown-ups?

For desecrating anything that ain’t theirs, those perpetually offended know-nothings ought to be turned over the nation’s knee and paddled.

Back in black & white, Sheriff Andy took his boy fishing and taught him about life. And somehow Opie didn’t grow up to be a whiny pajama boy vandalizing downtown Mayberry and monuments to General Lee.

A boy is a boy. Two boys are half a boy. And three boys are no boy at all.

And you can’t teach them cooped up in an educational warehouse with revisionist curriculum, America-hating administration, and man-eating teachers.

No, the problem is not boys growing up without fathers. There’s no shortage of fathers. Most of them are in the NFL.

What we don’t have enough of are dads.

The last thing his boy sees at night, the first thing he sees in the morning – boots on, kiss for Mom, cup of joe… Dad.

Oh, and yes… his little girl needs him just as much. From her old man she understands what a man is supposed to be. Or not. Just as from her mom she learns respect for the man. Or not.

Making babies… yeah, we figured that much out. Just not how to raise them.

That’s right… I said it.

There are many things a boy needs to learn to grow up to be man – none of which are taught in school: Changing plugs on a flathead eight, plinking cans off the barnyard gate, seeking mercy over hate.

Sure… the lad may worship with you on Sunday, but the rest of the week he is a ward of the State.

Actually, most everything worth knowing must be learned beyond the classroom through hard knocks and skinned knees… especially life’s most essential ingredients: Character and Faith.

And it’s faith in a Higher Authority that instills a faith in Higher Law:

The Commandments
The Beatitudes
The Bill of Rights

…and that justice ultimately belongs to God.

Robespierre believed that he was justice. And he led the French Lives Matter mob to destroy his enemies in the name of justice. But in the end, the mob destroyed Robespierre. 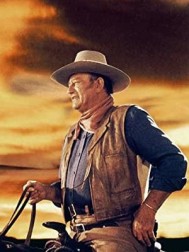 Yeah, that’s how the old saying goes, but…

And God is good.

Level Ground
We bless the Father and give the finger to our fellow man, then wonder why Dial A Prayer goes straight to voicemail.

The Haunted Schoolhouse
To solve the mystery, solve the crime. CSI begins with a one desk fits all warehouse where education goes to die.