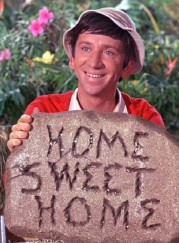 Back before Who Shot JR, every car chase, love triangle, and crime scene investigation wrapped up with a neat little bow in sixty minutes or less, and always just before the credits rolled. A missed episode meant nothing was missed: Every week Roscoe faithfully chased Dukes, Marshal Dillon shot outlaws, and Oscar kicked out Felix. Again.

Unfortunately, unending endings is no longer a novelty. Most streaming series make no sense without first rewinding every previous episode.

Simple plot lines became endless cliffhangers, enduring values like truth and integrity were open to interpretation, and comedic innocence had been replaced by raw obnoxious humor.

Precious weekends are wasted consuming story lines, plot twists, and subtle character nuances: The sturdy seaman, his luckless sidekick, the girl next door. Then without resolution or rescue, the show is unforgivingly cancelled.

Gluttony may be one of the Deadly Seven, but binge-watching should be filed under Sloth and silliness.
Even Mary Ann would walk out on an Island marathon.

Those hapless castaways spent three seasons on an island with …no lights, no phones, no motor cars (and one season with no color).

While waiting to be rescued, they enjoyed face-to-face time instead of facebook, honest-to-goodness sunsets over digitized screensavers, and worked out their differences instead of voting each other off the island.

Then… after years of syndicated reruns, rewriters rewrote their fate and the island shipwrecked were finally… finally rescued.  Only to discover that they no longer belonged in a world that had long ago tuned out.

But in true “Gilligan!”  fashion, the made-for-TV movie ended in yet another “…fateful trip” with the Minnow’s faithful shipwrecked once again. And (of course) back on an Island they never really left.

And as the credits rolled, nobody noticed they were gone.

We’ve been granted instant hi-speed access to everything and denied nothing – except the joy of doing without.

That simple facilitator, the telephone, has become an all-consuming obsession, cars have kicked out their drivers, and healthy debate has evolved into anonymous online attacks.

Your washing machine can order its own detergent, charge an on-file digitized credit card, DVR the latest streaming sewage, order an app’d pizza (from an unmanned kiosk) and have it delivered by drone.

No one has neighbors anymore. Just people who live next door. The rest of the world is just… there. Don’t have to talk to them, don’t have to listen, and don’t have to care.

We’re Lost – shipwrecked on self-made islands of indifference. The castaways though, seasons ago, discovered what everyone’s been searching for.

The Odd Couple
On November 13th, Felix Unger was asked to remove himself from his place of residence; that request came from his wife.

A New Hope: Yippee-Ki-Yay
Then cue the chiseled cowboy and his cotton calico’d lady: “Well, ya’ know – we’ll always have Abilene.”