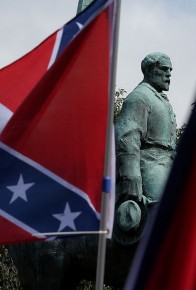 On April 9th of 1865, at Appomattox Court House, General Lee surrendered what was left of his army to General Grant.  The terms of the surrender were written out by Grant’s adjutant Ely Parker, an American Indian of the Seneca tribe.  Lee observed, “It is good to have one real American here.”  To which Parker replied, “Sir, we are all Americans.”

There were no ticker tape parades, no Nuremberg-style trials, and no public hangings.  The casualty total was the highest of any war, before or since, as American casualties must be tallied from both sides: North and South.

The war not only divided the nation but also families.  At Vicksburg, under a flag of truce brothers, fathers and sons were allowed to visit and exchange notes from home.

Most of Lee’s family, descendants of Virginia’s first family, sided with the North.  Lee opposed the dissolution of the Union, as much as he opposed slavery, but his loyalty was to his home, the state of Virginia, which he defended against a union of states that were not his home.

The United States had nothing but what was provided by the states.  The Confederate states held that their inclusion in the Union was similar to that of a club – they were free to join, and just as free to leave.

Lee’s surrender ended the conflict between the states, and the notion that the union was made up of free and independent states.  The slaves were freed, but the states were enslaved.  Still, after years of bloodshed, peace was welcome.

Lincoln’s address at Gettysburg sought no distinction between “…these honored dead.”  The Confederate soldiers who died were not part of an invading foreign army; they were family… literally.  The monuments and plaques erected in the midst of the war’s dying embers were meant to heal.   And have been up for years.  To be suddenly offended by them now is childish.

So, someone’s offended – so what?  There is no right not to be offended.  Welcome to America.  Putting up with other people is the price of living in a free society.  Funny how those who preach tolerance the loudest end up the most intolerant.

In any event, he’s a statue now. And statues have no hate.

Hate flows from the heart of man.  It is more self-destructive than destructive, and only fuels more hate.  During the french revolution, Robespierre used a hateful mob to silence opposition and eliminate political enemies.  In the end, that same hateful mob eliminated Robespierre.

“Remove not the ancient landmark, which thy fathers have set.”
Proverbs 22:28

If everything that offended anybody were eliminated, what would remain?  Monuments ought to be discussed in some orderly, public, and hopefully grownup process.  Not pulled down in the middle of the night.  (Is there anything more pathetic than the spectacle of the whiny and immature toppling a lifeless statue, then spitting on the metal and stone, as if it cared?)  Perhaps in place of General Lee they will erect a new statue… a snowflake – a testament to what this nation has become.

As Lee rode away from Appomattox, Union soldiers began to cheer, but were quickly silenced by Grant: “The Confederates are now our countrymen.”

The terms of surrender, for those of us who fought against us, were generous and simple: Go home and fight no more.

On the 4th of July
The Declaration made clear that man’s basic rights were found in nature predating government.