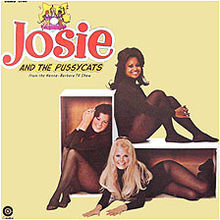 “…long tails and ears for hats!
Guitars and sharps and flats!
Neat, sweet and groovy song!
You’re invited! Come along!”

What more could any red blooded American boy want in a Saturday morning matinée? So, the lip-synching was a little off, and their conversational and musical mews never quite matched – so what?

Those chase tracks (for the inevitable escape today’s bad guy scenes) were spun by a real live all-girl band engaged by Hanna-Barbera just for show. They even cut an album, now worth its weight in vinyl gold.

Following a failed relaunch into “…Outer Space”, the ‘Cats finally landed a syndicated gig on various local channels as an intermittent re-run. And the band disbanded.

But on the prowl for a new Angel, Charlie recruited pretty kitty Cheryl Ladd to fill-out a different sort of mystery meddling trio. With or without Farrah, girl watchin’ at the Townsend Agency provided a lovely distraction from the show’s completely unnecessary plot and storyline.

Still, the lovely ladies lacked very little except a leopard-skinned girl band to cover their chase tracks with “Every Beat of My Heart”.

In their own way, all the curious kittens were more alike than not: Adorably innocent, delightfully vulnerable, and downright beautiful. And just as unlike as their unwatchable babe-less remakes. Yeah, no mystery there.

Hmmm… skimpy tambourine’d Angels groovin’ to their own chase tunes.

Flintstones of Bedrock, USA
The whole purpose of language is communication. Oh, sure… everyone’s talking. And talking at once. But no one’s listening.

Once Upon a Time…
Jim Henson struck comedic stardust pairing a self-absorbed Hollywood starlet with a swampy banjo picker.